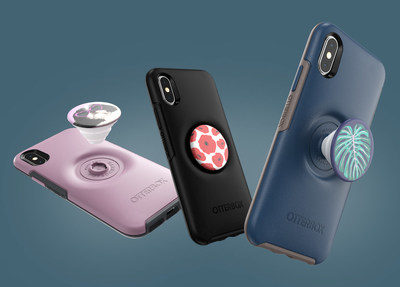 "Otter + Pop collection brings in a fresh take on two innovative products," said OtterBox CEO Jim Parke. "With added colors and graphics, you have even more ways to express yourself. The addition of Defender Series into the case mix is an exciting opportunity to protect devices with an OtterBox original while allowing you to personalize your case daily with the swappable PopGrip."

OtterBox innovates bold products that deliver confidence and trust in any pursuit. From its humble beginnings with a drybox in a Fort Collins, Colo., garage, OtterBox has honed and leveraged its expertise in manufacturing and design to become the No. 1-selling smartphone case brand in the U.S. and a leader in rugged outdoor lifestyle products.1

At the center of every OtterBox innovation is a deeper goal to effect positive, lasting change. In partnership with the OtterCares Foundation, OtterBox grows to give back by inspiring kids to change the world through entrepreneurship and philanthropy. To learn more about this mission, visit otterbox.com/givingback.

In 2010, Barnett was looking for a way to stop his earbud cord from getting tangled, and he achieved this by gluing two buttons to the back of his phone and wrapping the earbud cord around the buttons. As ugly as the buttons were, they worked. In the course of improving on the idea, he developed about 60 different prototypes, making the buttons expand and collapse via an accordion mechanism, so that they could function as both a stand and a grip. In 2012, Barnett launched a KickStarter campaign for an iPhone case that would have two PopSockets grips integrated into the case. In addition to getting successfully funded, the KickStarter campaign enabled Barnett to show the world his dancing prowess. Two years later, in 2014, Barnett launched the business out of his garage in Boulder, Colorado, and has subsequently sold over 40 million PopSockets grips around the world.

2 Symmetry Series and Defender Series are NOT protective against water. Will provide added protection against drops and shock